(This Is The Page Your Competitors Hope You Never Read)

Mind If We Ask You a Trick Question?

Almost everyone says 20%. The correct answer is 100%? That’s right, increasing your production by only 20% doubles your profit! It’s true, read on.

Masonry bids are about 40% Materials, 50% Labor, and 10% Overhead and Profit. (Notice how the Labor number is 5 times bigger than the Profit number? Make a mental note of that.)

Look at what happens if you work a little faster and shave just a fifth off your labor. The money you were paying out in labor flips over to Profit, doubling it. 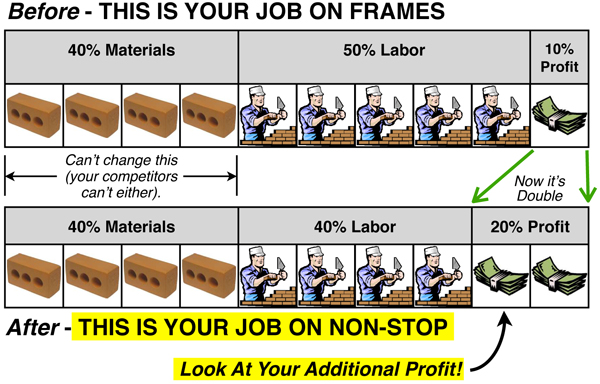 Everybody using frame scaffolding is working with the same 40-50-10 ratios. Switch to Non-Stop and your numbers go to 40-40-20!

NON-STOP GIVES YOU 20% MORE PRODUCTION BY SIMPLY REMOVING THE REASONS WHY YOUR MEN STOP WORKING, OR WORK SLOWLY.

Everyone says their men are working as fast as they can, and they’re right! But that’s not really the question. The question is, are the masons putting in units ALL THE TIME? Because that’s what matters. And the answer is, they absolutely are NOT. Working on conventional frames FORCES your men to stop frequently and work slowly when they:

To get 20% to 40% more production with the same crew, all you have to do is REMOVE THE REASONS YOUR MEN STOP WORKING OR WORK SLOWLY. With that small change, you’ll jump to 40-40-20!

To illustrate, let’s talk about a job you just landed with a $100,000 bid. Ideally, you want to build the job, have everything come in on budget, and have $10,000 left over for your Overhead and Profit.

If you’re going to make more than $10,000 Profit on the job, it’s got to come out of either Materials or Labor. You can’t reduce the Materials, but then neither can your competitors. Any additional Profit you make will have to come out of Labor.

What would happen if you shaved 20% – just one fifth – off your Labor? How much extra money would you make? Well, we know there’s $50,000 Labor in the job. Shaving off a fifth saves $10,000, which, by the way, is the same as the Profit number! YOU WILL DOUBLE YOUR PROFIT!

Very few contractors make this connection because it seems so illogical on the surface. Your brain says “20% more production gives you 20% more profit.” But that’s WRONG. It’s only correct if the Labor and Profit are the same amount, but the Labor number is 5 times bigger than the Profit number. 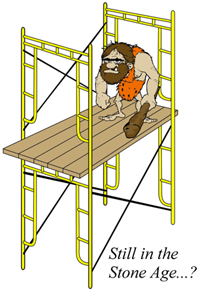 Let’s think about an extreme situation to prove the point: What if a bricklayer started laying bricks on a very long brick wall, at perfect waist height, and never had to stop all day – he just laid bricks. How many brick would he put in? At least twice as many as he does now, with less effort (it’s all waist-high, remember), and with no difference in quality. If your men could do that, your labor would be cut in half!

When you remove all the reasons they work slowly, or stop, your men will put in 20% to 40% more units without even realizing it.

How Non-Stop Does It 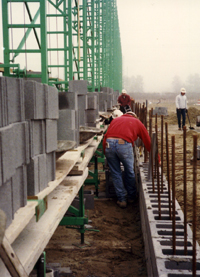 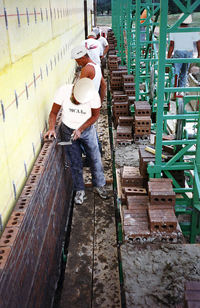 2. Your bricklayers work non-stop, at the perfect waist-high level, all the way to the top. No more stopping to hop planks. No excuse not to produce.

3. Your mason tenders no longer hop planks, re-handle materials, or build scaffolding. Their only job now is to raise the scaffold and tend the bricklayers. On average, they will crank for 3 minutes, and tend the masons for 20 minutes.

4. When the wall is topped out, you can let the scaffold down in about 20 minutes. Pick it up with your forklift (up to 45 feet high) and move it to the next wall in 10 minutes per tower. Non-Stop moves from wall to wall FOUR TIMES faster than frames, at ONE-FIFTH the labor cost.

5. You’ll use about one-third as many scaffold boards on Non-Stop. You deck one level, and that’s all.

6. Eliminate OSHA violations. One guardrailed work platform travels up and down the tower.

Put In Even More Materials

There are other times your bricklayers are working slowly. Building leads is one.

Studies have shown that masons lay about 50 brick an hour building leads, as opposed to 150 brick an hour between the leads. Lead-building kills about 40% of their day. What would happen if they never had to build leads?

For another 23+% production, and higher quality, check out our Speed Pole page.